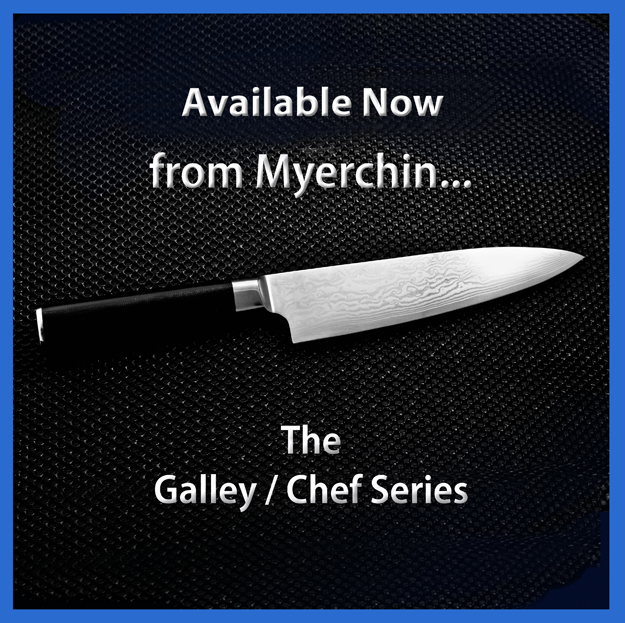 Below are some some FAQ's, or "frequently asked questions". We hope that you find the answers to be informative and maybe a little entertaining. If you have additional questions, suggestions, or anything else on your mind,  send us an email. We carefully read every customer comment.   E-mail Myerchin

How come I've never heard of MYERCHIN knives?
MYERCHIN has been providing quality rigging tools to working seamen and seawomen since 1984. Throughout the years, our company has concentrated on doing one thing in an exceptional manner, i.e., the production of some of the finest rigging tools in the world.   Our customers include the US Navy, US Coast Guard, US Army, merchant marines, and sailors around the world. Ask any sailor about MYERCHIN knives and you'll probably get the answer, "real working tools." 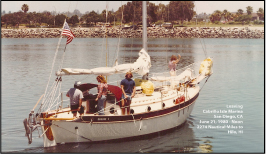 (above left)  1980, John Myerchin, his wife,  and their three teenagers leave San Diego bound for HI.  (above right) John Myerchin's Westsail 32 at anchor off Lahaina on the island of Maui. It was during this voyage and aboard this boat that John started sketching his first rigging knife, the Model A001, after he had a competitor's non-locking folder close over his thumb. With butterfly bandages and his thumb wrapped in gauze, John sat on top of he cabin roof and navigated to and from the islands with a sextant and charts.

John built the boat... purchasing only a hull and deck from the Westsail factory.  The first order of business: lay in 7000 pounds of lead shot and secure with resin and glass in place.  A year and a half later and a huge pile of teak and mahogany sawdust to show for it, the 32 footer was ready for trials to the Channel Islands in Southern California and the Mexico coastline.

Where did the name MYERCHIN come from?

When John Myerchin's grandfather and his grandfather's two brothers came to the United States in 1870 from the Czech Republic, the officials at Ellis Island created the name MYERCHIN when they heard the Czech name, Majercin, pronounced in the native language. Because of this, John is probably related to every MYERCHIN (and many Majercin's) in the country. For a full history,  click on our Family Website:     www.myerchin.org

Any Special Recognition by Important Groups?
While Myerchin® has received many awards and special recognitions from industry leaders, our finest award came from General Thomas W. Kelly and the U.S. Joint Chiefs of Staff.   On July 15, 1991, we were awarded  a Certificate of Appreciation " for innovation in the art of knife making with particular emphasis on  providing instruments that are needed and used by the Special Operations Community a lasting contribution to the nation."

Where can I purchase a MYERCHIN?
MYERCHIN knives are available from many boat outfitting outlets and sporting good stores.  If you are unable to find a supplier near you,  this website allows you to order securely and directly from us.   You can also request one of our catalogs.

Since I haven't heard of this knife line, how do I know they're reliabable?

The above phorto shows the first prototypes hand carved by John from leftover teak used on his boat.

These knives have been tested since 1984 in the harshest environment on earth... the world's oceans. The Navy, Coast Guard, Merchant Marines, Harbor Patrols, and others who make their living at sea have tested these knives by making them the working tools of choice. Now our knives are constantly tested by hunters, backpackers, police, emergency workers, fishermen... real people who use our products on the job every day. Our products are best viewed as professional tools. Our warranty is one of the best in the country.

In July, 1997, John decided to retrace the steps of the 1897 Klondike gold seekers.   It was the 100th anniversary of the "Klondike Gold Rush".  The 28 mile hike began at Dyea, Alaska and ended at Lake Bennett in the Yukon. The hike took him over the formidable Chilkoot Pass. The original Klondike gold seekers had to carry their ton of goods over the pass... one hundred pounds at a time... twenty trips!  Luckily, John only had to make this treacherous trip once.

During the trip, his party tested many models of Myerchin knives, including the LIGHTKNIFE®, the Model B300P Captain Pro, and the B100, Offshore System.   All products were thoroughly tested and they performed flawlessly.

During the hike on the Chilkoot trail, the LIGHTKNIFE was used for all sorts of challenging tasks.... including (below) the "all important" spreading of peanut butter on bagels. 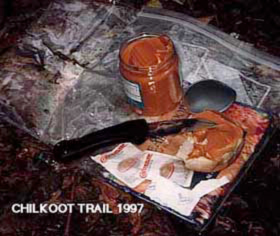 John is still active in the business.  His latest project is the Chef / Galley Series.  When completed the series will include a flawless 8" Damascus Chef knife, A 7" Damascus Santoku, and a smaller Damascus utility knife.  All of the pieces will be forged from the finest Japanese steel.  There is more information on the Featured & New Products page.